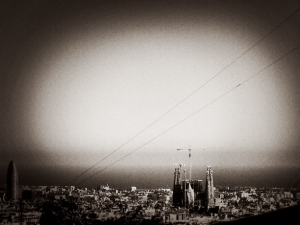 A few months back The Man decided to compete for a chance to be a booth babe for his company at the Mobile World Congress in Barcelona. A competition that included a written essay stating why he would be perfect for the job and two telephone interviews. I think to everyone’s surprise he won! All that was needed was a pair of “smart” pants and he was all set.

I promptly announced in no uncertain terms that I would be joining him.  I had recently watched an episode of Rick Stein in Barcelona and I  couldn’t wait to go to the La Bouqueria Market. Yeap, that is exactly what happened, I flew to Spain for a weekend of tapas and The Man charmed the world with mobile phones.

It was a pretty turbulent week preceeding our trip so I didn’t do the research I usually do and arrived with no particular destination save the market. While I know there are places that are far more impressive than the places we stumbled upon, we found it impossible to eat poorly if you disregard the airport. I arrived on the last flight to Barcelona on a Thursday and had resigned myself to the fact that my first meal was probably going to be Mickey D’s. Luckily I was so hungry that didn’t matter. How lucky was I when I found a couple of restaurants across from the hotel  open and ready to feed us.

Believe it or not only 20 minutes including a quick defrost of the jumbo shrimp.

Okay back to story.

So, I pigged out on montaditos then went to bed. The next morning we headed straight for The Boqueria. 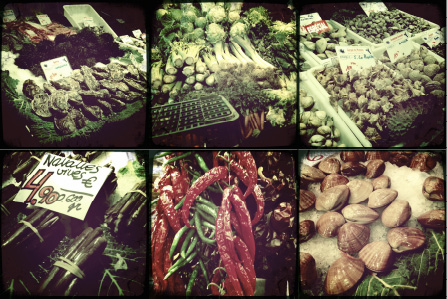 It was everything I had thought it would be, row after row of fresh seafood. Things  I have seen before and not, fruits and vegetables  beautifully displayed, meat and more fresh meat, peppers, spices, fruit juices, eggs… I turned to The Man and said, you know what we have to come back and rent an apartment, just spend a week buying our way through the market. There was so much there to play with and discover. I just have to head back to Spain for a proper tour.

We ate “breakfast” at one of the legends, Bar Pinotxo. It’s a tightly packed bar arrangement.  If you want a seat you patiently stand directly behind the person sitting in the chair you want until they have finished their food. In most circumstances this would be off putting for all involved, but here it’s novell and fun plus it gives you a chance to eye the dishes as they come off the grill.

I had the seafood platter and The Man the meat grill. I wasn’t all that impressed with the seafood grill to be honest.  It looked impressive with ocean crayfish, shrimps, munk fish and salmon, however the flavors were pretty bland.  The Man and I generally make it a rule to order different plates which has saved us a few times.  I thought the meat grill was a very good choice with tender, flavorful selections of lamb, pork chops, sausages and beef. Our neighbors ordered the steak and a plate of grilled vegetables. How do we know this? I am afraid we ooohed and awed and looked pretty desperate.  So much so they decided to gives us poor begars a taste of their veggies.

Jewels on a plate, absolutely delicious array of carrots, bell peppers, mushrooms and egg plant. Never before have I ever liked a carrot more, delicately packed with natural flavor. Some how our generous neighbors seemed non-plussed and left the plate behind which meant only one thing, we jumped on it like vultures.

I loved the experience, but I have a mixed feeling about the food. Definitely go for the grilled meats and vegetables, the whole grilled fish looked pretty good so you might want to try that too. However, the mixed seafood plate really didn’t live up to my expectations. It’s not cheap so bring your credit card.

In the La Boqueria Markado

Oviso is an ecclectic spot on Placa George Orwell in the old town. We had passed by a few places that kept getting my veto, then The Man’s veto before we turned back the way we came. The Man made an executive decision and walked us into Oviso a dark, scruffy spot with bright red walls and blue peacocks alfrescoed on the walls with low seating.  The menu is simple, sandwiches, salads burgers and picadas along with a full bar. 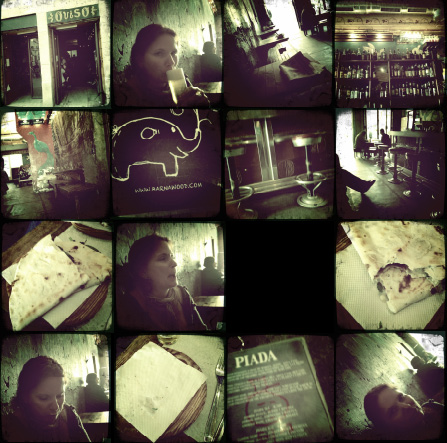 We had studied the menu as we kept an eye on what was coming out of the kitchen. It all looked good. We both settled on the Piada with air dried ham, cheese and salad. A Piada is an italian flat bread made with a fine flour, lard and salt that is served toasted and filled with a variety of fillings. Something between a Mexican tortilla and french crepes.

It was out of this world, perfectly salty, cheesy, crunchy and fresh. The silence was intermittenly broken by one of us telling the other how amazing this Piada is. We kept talking about it long after we left. I was hard pressed not to order another one to accompany my mini bottle of cava that I had for dessert.

The pride of the owners and the staff was clearly evident. The glasses were carefully inspected for spots, the silverware polished in a manner one would expect of a more upper market venue and from what I could tell, they put love into all their dishes. Thus, I warmly recommend this spot especially if you are on a budget, but still want fresh, quality food.

Placa George Orwell in the Old Town off the La Rambla.

This restaurant led us to La Born the more trendy hipster district in Barcelona. Unfortunately the line at La Paradeta was just too long so we had to go elsewhere. Therfore, I can’t give you any indication of the quality of the food, but I can tell you about why we went there.

It was a bit disappointing not being able to buy all those strange looking clams and sea creatures at the market and take them home to eat. So, I went on a serach for a reasonably priced seafood restaurant that would give us a wack at these unusual little animals. I found La Paradeta, which is essentially a restaurant that is also a seafood market. You walk in, get in line like you would at a market, point out what you want from their catch of the day, how much, pay by weight, get a number then take a seat  while they cook it up for you. This means you can eat as much or as little as you want. I was all for this as I wanted to try out these oceanic odds and ends without commiting to an entire dish. The perfect sampler.

But like I said, the line was around the corner and it was close to closing time.  If you go there please let me know how it went. I am dying to know.

Several locations check out their webpage for the nearest one to you.

The Man had a mission to show me Bar La Masia. We both like to find the unpolished local spots. As we wondered down the street through old town I kept saying well what about this place or that place looks local. No he says, let’s just look at my place first. As we started to pass I said, ooooh that place looks really cool too. THAT’S the place! Oh yeah good eye, I say.

Now when I say cool I don’t mean trendy and hip. Bar La Masia is an older family owned spot that hasn’t changed a lick since it opened in 1952 more than the odd photo added to the wall. It’s like stepping back in time only a little dustier. One of those places that you just feel was very much loved by its founder and clientel, enfused with decades of memories. It first passed down to the daughter then to the granddaughter whose family is now celebrating 60 years of business.

These places always fascinate me. I love it that not much has changed and I get to experience it as it is and as it was. As if I had known it all along. Probably because I am constantly changing everything in my environement or contemplating how I would change it if I had the skill and the dosh. I truly marvel at peoples ability to be happy with the same old view decade after decade. Truth is though I am a sucker for nostalgia even if it isn’t my own and La Masia fits the spot.

Everyone who works there has a smile on their face, are laid back and helpful. While the crowd leans towards the young college student, you will find long time regulars there as well.  It’s a nice place to start off your evening after Siesta. Of all the places we ate at this one was the least impressive, but it is also very affordable and what you would expect of such a spot. I can recommend the Picata i Carn,  little balls of potato stuffed with spicy meat then deep fried to a light golden brown. The house wine is very acceptable and the cava yes, always go for the cava.

Just off  La Rambla across from the Camper hotel.

La Miramelindo is rumored to have the best Mojito in town. I only had the one mojito, the Miramelindo Mojito, so I can’t really say if this rumor is true or not. I spent most of my time drinkning the bubbly cava. While it is well made I found it on the sweet side, none the less I really liked this place. It has the feel of being a cocktail bar from the days of the literary Lost Generation.

It was filled to the top with people, but the bar was fairly easily navigated with one exception. They don’t take card. Hurumph. Just the same it’s a spot worth visiting and as it is located in La Born there are many other places to check out while you are there.  Mini-pub crawl highely recommended.

Link to help you find your way around.